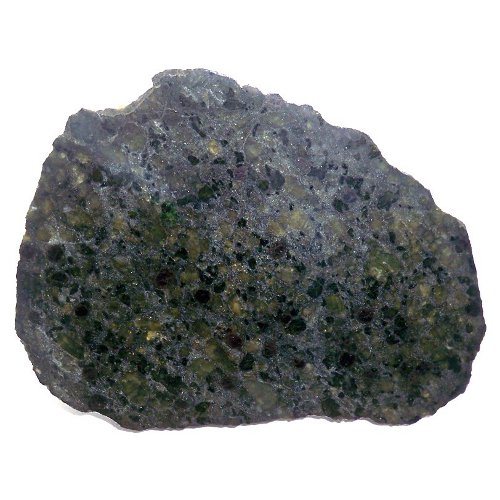 Some information about eclogite:

Eclogite is a mafic metamorphic rock. Eclogite forms at pressures greater than those typical of the crust of the Earth. An unusually dense rock, eclogite can play an important role in driving convection within the solid Earth.

The fresh rock can be striking in appearance, with red to pink garnet (almandine-pyrope) in a green matrix of sodium-rich pyroxene (omphacite). Plagioclase is not stable in eclogite.

Eclogites typically result from high to ultrahigh pressure metamorphism of mafic rocks at low thermal gradients of <10 °C/km (29 °F/mi) as they were subducted to the lower crust to upper mantle depths in a subduction zone. They are generally formed from precursor mineral assemblages typical of blueschist-facies metamorphism.

Eclogite is a rare and important rock because it is formed only by conditions typically found in the mantle or the lowermost part of thickened crust.Eclogites are helpful in elucidating patterns and processes of plate tectonics because many represent the crustal rocks that were subducted to depths in excess of 35 km and then returned to the surface.