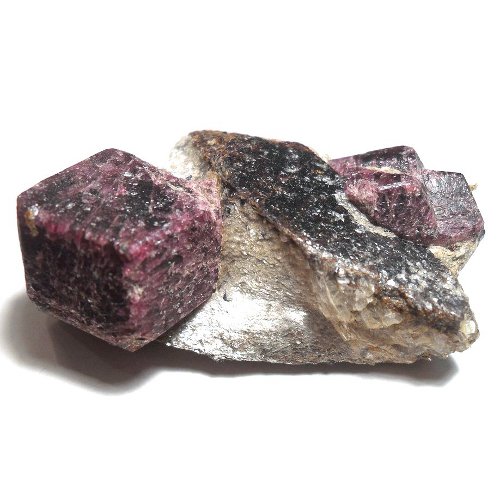 Some information about garnet:

Garnets are a group of silicate minerals that have been used since the Bronze Age as gemstones and abrasives.

Garnets possess similar physical properties and crystal forms but different chemical compositions. The different species are pyrope, almandine, spessartine, grossular (varieties of which are hessonite or cinnamon-stone and tsavorite), uvarovite and andradite. The garnets make up two solid solution series: pyrope-almandine-spessarite and uvarovite-grossular-andradite.

Garnet species are found in many colors including red, orange, yellow, green, purple, brown, blue, black, pink and colorless. The rarest of these is the blue garnet, discovered in the late 1990s in Bekily, Madagascar. It changes color from blue-green in the daylight to purple in incandescent light, as a result of the relatively high amounts of vanadium (about 1 wt.% V2O3).

Because the chemical composition of garnet varies, the atomic bonds in some species are stronger than in others. As a result, this mineral group shows a range of hardness on the Mohs scale of about 6.5 to 7.5. The harder species like almandine are often used for abrasive purposes.